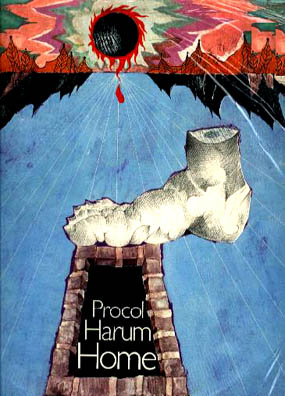 Liner notes: Patrick Humphries (from a 1988 Castle Communications LTD CD re-issue)
Home was Procol Harum's fourth album, which gave the band breathing space after the majestic A Salty Dog. Home was their first album without Mathew Fisher, whose hallmark organ sound has graced the first three Procol albums, and of course was such a feature of A Whiter Shade of Pale.

Like Orson Welles, Procol Harum could be said to have started their career at the top and worked their way down! This though, is an unjustifiably blinkered view of one of Britain's best and most eclectic bands of the sixties. While A Whiter Shade of Pale is indelibly associated with 1967's Summer Of Love, during their ten-year career Procol released ten remarkable albums.

Home is a marvellous souvenir of Procol Harum's variety: their roots are displayed on the opening Whisky Train, Robin Trower's bluesy guitar blazing a tribute to Presley's Mystery Train; the epic Whaling Stories is Procol at their most ambitious, ploughing the furrow of 'progressive rock' they had made their own; Your Own Choice and Still There'll Be More are typically inscrutable, while the plaintive Nothing That I Didn't Know displays a gentler, acoustic side of the band.

With Gary Brooker's gutsy vocals, Trower's flamboyant guitar, B.J.Wilson's relentless drumming – he was, after all, Jimmy Page's first choice for the Led Zeppelin drumstool – and Keith Reid's enigmatic lyrics, Home shows how far Procol had come since their days as the Paramounts, and how much they'd developed in three years since A Whiter Shade Of Pale had seen them earmarked as one of Britain's most promising new bands.

With so much already achieved by the time of its release in 1970, Procol Harum proved with Home that there was still plenty ahead. They were never the one-hit wonders their critics claimed; if nothing else, this album at least proves that!

Sam Behrend notes: 'When I brought Home home for the first time in 1970 and put it on the turntable I realized that one side of the entire LP was pressed at the wrong speed. When played at 33-1/3 RPM it sounds speeded up. I still have that LP and wonder how many were produced and sold with this defect. I imagine that most people would have returned the LP and those returned were probably destroyed. I will be curious to know if you hear from others with this possibly rare pressing.