In the liner note for the Repertoire CD-re-issue of Grand Hotel, Gary Brooker tells how the two-year gap since Procol Harum had last recorded new material was affecting his writing: 'I found myself using a couple of ideas in one song', he told compiler Chris Welch. Welch's note calls Robert's Box 'a holiday song influenced by the exotic atmosphere of the Caribbean islands' – he is surely not referring to the words! – and notes that the elaborate arrangement has two other distinct parts, including a chorus which has nothing to do with the verse. Gary reports that 'much of the whole album is like that. There's a schizophrenic element where lots of the songs are in fact two songs. So you get more for your money!' Part of the achievement of this often-overlooked song was the way that Reid's verbal theme – short on words, long on emotion – provide the conceptual sticky-tape to hold the diverse musics together.

Though the words themselves fall into two parts. The printed text is just six couplets (which rhyme, if 'remedy / fee' is pronounced with sufficient emphasis, or half-rhyme in the case of 'box / cost') whose import seems unusually straightforward. But the title is another part again. The song is a comparative rarity, in the Chrysalis years, in that its title does not appear anywhere in the song, and the unusually specific name has attracted some discussion. The only relevant 'Robert' known to Procol fans is ousted drummer Bobby Harrison, and it seems unlikely that the 'box' is his drum kit, or a container (as in 'box office') for collecting royalties. The song has two characters, the pleading narrator and the silent doctor, but the title doesn't indicate which, if either, goes by the name of Robert. The name itself is of Germanic origin and means 'bright famous one' … could this Robert be one of the 'famous doctors' who 'all agree' in Fresh Fruit? And what of the box itself? 'Box' is an odd choice for a song title [though Living in a Box was a hit for Living in a Box] but Procol Harum can boast the unusual distinction of having released box-singles of both male and female variety (a 'box' is the testicle-guard worn by cricketers, as well as being US is slang for vagina). This, like the existence of Robert Heinlein's Pandora's Box (1950) can be only a coincidence, as was the delightful episode of the bemused railway conductor named 'Robert Box' who was photographed by Procoholics at Redhill in 1997.

But the fact remains that it’s a very odd title. Other male-named Procol pieces include Juicy John Pink, For Liquorice John and Poor Mohammed: some, at least, of these are puns, so perhaps we are supposed to hear 'Robert's' as 'robbers' (though this doctor doesn't take anything from the narrator) and 'box' as 'pox' … maybe medication is being sought to relieve a 'pox' or venereal disease. Maybe 'Robert' is to be taken in its hypocoristic form 'Bob', which is Cockney rhyming-slang (on the basis of comedian Bob Hope) for 'dope'? It has often been noted that the Beatles have a song Dr Robert (Keith Reid speaks, in Toujours L'Amour, of 'buying a revolver', which some choose to see as a reference to the Beatle album in question, just as they imagine the reference to 'plimsolls' in Rambling On to be an oblique name-check for Rubber Soul). Certainly Dr Robert did influence Procol Harum (think of its middle section, alongside the middle of The Final Thrust) but 'Doc Robert' in Lennon's lyric 'does everything he can' to assist the wealthy New York socialites he sets out to lure into addiction: and this is a very far cry from the obstinate intractability of Reid's doctor in this song.

Keith Reid explained the song to Hit Parader (May 1973): 'It's about being a doctor [sic]. The box being his bag full of equipment that will help the patient get well. It's a very sad song, lyric-wise. The poor patient is needing help and isn't getting any. A very pathetic situation.' It's not easy to accept some of this explanation, not least the idea of the 'box being his bag', which does not square with ordinary usage: in a medical context, 'box' is the receptacle in which tablets were dispensed, in the days before plastic. However the illustration by Spencer Zahn in the Grand Hotel booklet does show a gaping medical bag, mysteriously emitting vapour, or possibly flames. Whether Zahn responded to the songs solely, or received direction from the band, is not known. The implication might seem to be that if you play with this doctor, you play with fire.

Keith Reid did not, himself, dilate on any Beatle parallel, though he is reputed to be fond of their Revolver-period work. However Gary Brooker's setting of the words does seem to have absorbed good numbers of period influences of its own. Following the jumpy descending start – which is reworked with more chords and more forward impetus in Nothing But the Truth, chronologically the band's next track – the main part of the song seems very simple, spinning an attractively straightforward melody in C major over standard I, IV and V chords. The verses highlight a rolling piano, some dry and flamboyant drums, and two flavours of organ; but it's with the background sounds that much unpredictable care has been taken. The echoey backdrop in verse one sounds very much like a Hawaiian guitar, though no such instrument is credited on the sleeve. In live performance, Mick Grabham took care of these fills with some silvery lead-playing (mp3 here), but this did not quite share the Polynesian character that presumably prompted the Repertoire liner to mention a 'holiday character'. These effects might seem to belong more to A Rum Tale with its island in the sun, than to the world of the pleading drug-addict. Keith Reid told Hit Parader that 'The music though, is very bright... almost like carousel music. That's the black humour of the song, the direct clash between words and music.' However it is perhaps not entirely a clash: the 'holiday' music lies aptly behind the addict's plea for exotic comfort. This correspondence is highlighted in the second musical element, the chorus or hook, which piles on a multiplicity of doo-wop vocals while diving to A major and back to C. Here Brooker's music glances at the world of the Beach Boys, especially with the comic basso (heard also in Skip Softly and Nothing But the Truth – presumably all the voices are Gary's): listeners are reminded of Oh Darlin' and similar highly-arranged pieces. Once again there is a sort of appropriateness, in that this sound-world suggests the addict's desired 'escape' into some moments of carefree exuberance: as suggested above, such consideration of the libretto does much to justify the apparently arbitrary, modular construction of the song.

By the time the third verse arrives, and the implacable doctor has still not come up with anything to assuage the narrator's yearning, the backing has grown a bitterly ironic additional element. With the Doctor seemingly locking his door, the crooning in the background takes on the dreamy quality of a Hawaiian 'aloha': the word is clearly heard. We need not have recourse to a Hawaiian dictionary to know that 'aloha' embodies a loving welcome, and this is no doubt what the narrator wishes he was hearing. The use of a Hawaiian term, incidentally, fixes the 'holiday' element not in Caribbean (though the song might have been written there … ), but in the terrain of Gary Brooker's Godmother, who, as he explained to Douglas Adams at in the Barbican interview in 1999, was Polynesian herself (mp3 here). In fact the texture of this song is probably the closest Gary got to reproducing the music that his father, Harry Brooker, made professionally with Felix Mendelssohn and his Hawaiian Serenaders. The healthy, seaside associations of the 'Aloha State' again tally neatly with image the Beach Boys in their surfing era were eager to foster, and which the record-buying (and record-making!) public seem to have swallowed: 1965 saw two hit singles with 'Hawaii' in the title, and the Kinks recorded Holiday in Waikiki on Face to Face in 1966.

Finally, as the music makes its final great leap into an entirely new element, we sense that the coda demonstrates what will surely happen in the mind of the unsatisfied narrator. Gone is the lightweight 'aloha' chanting, the easy harmonies: in their place, one of Brooker's tricksiest and most elaborately ingenious little cycles, poised over an unorthodox bassline that starts by dropping a semitone, then goes up a tone, and down a fifth (a G chord predictably follows the opening C, but the following F#7th is entirely unexpected). The band shifts this up a minor third and repeats it in A, then drops it a minor third to resume in C again. Unlike the serpentine organ solo that depicts wandering sanity in In the Autumn of my Madness, and which visits every key, this motif cycles back and forth in a vicious circle, while the arrangement grows more and more foreboding and Wagnerian. At 3:59 a brass figure is heard, similar to the introductory melody that is stated twice in the first twelve seconds of the Beach Boys' God Only Knows; but the upbeat nature of that song is utterly passed over. The Robert's Box playout grows more and more weighty, and the harmonies break away into a very Procolian pattern of grandly rising bass, passing diminished sevenths, and heroic screaming guitar; we are back in the territory of the magnificent instrumental passages that concluded the first three Procol Harum albums. 'I also like very much the way the song ends, 'Reid told Hit Parader 'When one hears the ending, they know it's not only the end of the song, but the album, too. I like the idea of that.' In fact the final chord cuts off very suddenly, and in live performance the band used to extend it considerably (mp3 here) for Beethovenesque effect. 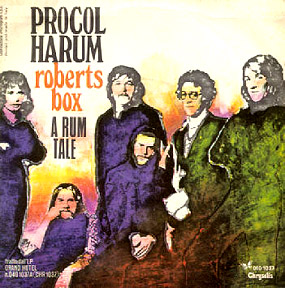 The song had probably been played as early January 1972, when Procol did a short British tour with Amazing Blondel supporting. It was first recorded with Dave Ball on lead, and later Mick Grabham re-recorded the guitar parts. Gary told Melody Maker (22 April 1972): "I’ve written about five or six tunes." These must have been Grand Hotel, Souvenir Of London, Bringing Home The Bacon, Fires (Which Burnt Brightly) and Robert’s Box … the sixth tune is either A Rum Tale or Toujours L’Amour). Robert's Box was definitely on the setlist from July 1972, and was a promotional regular in 1972 / 1973. In 1973 it was lit with a shift to greens and blues on stage, and the demeanour of the entire band changed as they absorbed themselves in a groove more mellow than much of their other material requires. The song has not been heard since then, a notable exception being the fans' party at Redhill 1997, when it was played at the request of Alan Cartwright: one can see that a bass-player would get a lot of satisfaction from the final sequence.

Thanks to Frans Steensma for additional information about this song