A Whiter Shade of Pale

The masterpiece that started it all

Words
Reid for yourself
AWSoP quoted by Kate Bush in a song on which Gary Brooker plays Hammond organ
On-going discussion: what do they mean?
The envelope in which the words left the lyricist
Gary Brooker's comment; Matthew Fisher's comment
Big, interesting article from Lives of the Great Songs
AWSoP words in charity auction: a little light on the "might've been closed" variant
AWSoP in full with all the abandoned verses at Douglas Adams's house party (The Guardian, 3 June 2000)
The phrase 'whiter shade of pale': examples of its passage into common parlance 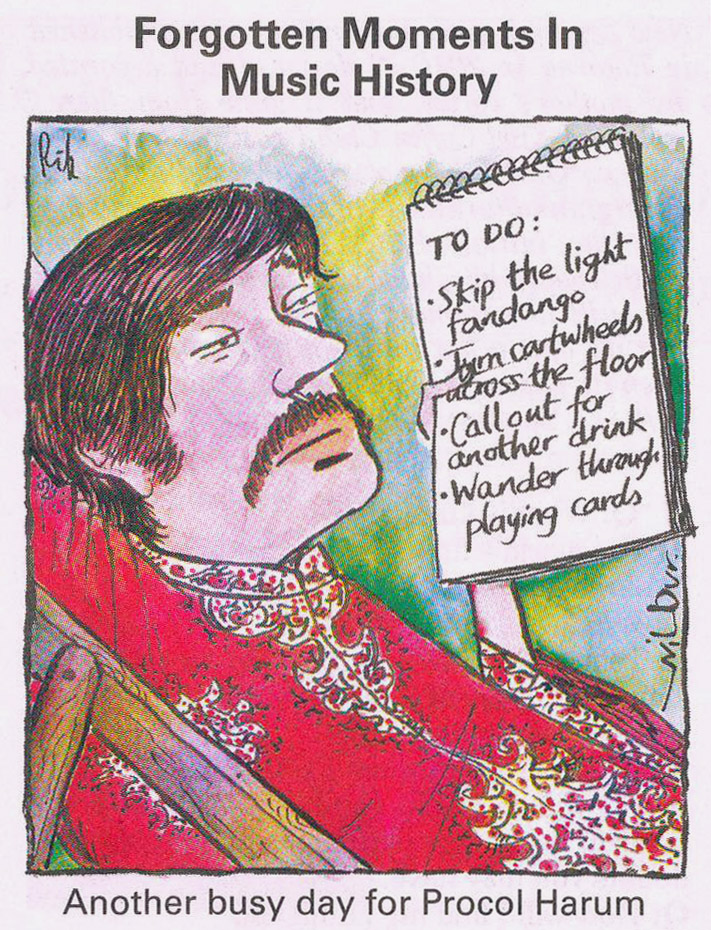 June 2005: lawsuit about the authorship of the music of AWSoP
Brooker / Fisher / Reid: Joan May writes on AWSoP and its composers
Brooker / Fisher / Bach: read What Bach piece? and Bach and Fisher
AWSoP helps Europe celebrate Bach (not)
Britain's foremost contemporary playwright, on Bach and AWSoP
How much of AWSoP did Matthew Fisher write?
Gary Brooker talks about writing and arranging the song (BBC Radio 4, March 2002)
Gary Brooker talks about writing the song (BBC Radio 4, October 2004)
Fisher's own account of the organ melody on BBC Radio Merseyside
Matthew Fisher writes to Melody Maker about precisely who did what AWSoP-wise
Gary Brooker's whimsical account of the circumstances of composition
More of the same: letter to Mojo 47, 1997
Play it on the mouth-harp: see here
AWSoP used in an episode of Dr Who not written by Douglas Adams and played live in a US programme entitled House
A possible Scott Walker influence?
A more-or-less recognizable karaoke MIDI version on the web
A Brass band in Swindon, UK, who play AWSoP
This website can supply two AWSoPs to be your Nokia mobile-'phone ring-tone (look for Procul [sic] under Classic Rock)
Brooker and Fisher record two television interviews about AWSoP in October 2000
AWSoP used in a Norwegian TV commercial
Geoff Whitehorn's solo A Whiter Shade of Pale in Guitar Techniques.
It appears that the 1967 Procol recording (transposed up a tone) forms the intro to Track 3 from the 2008 Girl Talk album, Feed The Animals: sample here and do play 'spot the [sic]' with No 14 on this list
You may be interested to listen to, and read, this page about AWSoP covers

The Record
YouTube clip of the original 1967 line-up of Procol Harum playing A Whiter Shade of Pale
This link, should you choose to follow it, will yield access to a mixable online multitrack of A Whiter Shade of Pale ... albeit not the original!
Acknowledged in the USA's 'Rock and Roll Hall of Fame', 2018: see here
July 1967: in a flawed performance, Gary Brooker sings part of the (missing) third verse of AWSoP on BBC TV's Top of the Pops
Why was it a hit at all? Comic article here
The most-played track at the Beatles' Sgt Pepper launch party? See here (thanks, Charlie)
Salutary demographic information from 2013
'Songfacts' page about the song. Facts? Might be better entitled AWSoP's Fables ...

Good(ish) AWSoP article in the Sydney Morning Herald
The drummer's tale: who played drums on A Whiter Shade of Pale?
What's that sound?: a guide to Matthew Fisher's Hammond registration
Gary Brooker on AWSoP in 1967
Very early (May 1967) English review of AWSoP
Very early (July 1967) German review of AWSoP
A very early newspaper article plugging A Whiter Shade of Pale
AWSoP gets its first BBC airing
About the first AWSoP film
Front page of Disc and Music Echo, June 1967
A misprint on the US 45 rpm AWSoP
AWSoP offered on acetate to Love Affair in early 1967
Procol Harum's A Whiter Shade of Pale in the UK singles charts
30 years of '... that song' and a pictorial blunder from Vox magazine
AWSoP featured in a book about Hammond organs
AWSoP as a life-landmark - a second-generation AWSoP marriage - AWSoP as a funeral dirge - Gary Brooker as Cupid - AWSoP heard in the dark, AWSoP through a Rambler window, AWSoP tops the 2009 funeral charts
The pop melting-pot from which AWSoP emerged
Résumé in The Times, November 1998
Fascinating Norwegian literary references: here and here; American literary reference here
French literary reference here; Swedish novel-references here; Dutch novel reference here; German novel reference here
AWSoP: reassuringly overheard in Java
From Kaleidoscope Eyes: Psychedelic Music From the 1960s to the 1990s by Jim Derogatis, 1996.
From a 1983 Encyclopedia of Rock
A radio interview about an astonishing AWSoP collection
A more or less accurate snippet from a widely-read Sunday paper
Gibbs Magazine: an article relating US political life in 1968 to the words of A Whiter Shade of Pale
The famous single re-released, August 2007, with amended authorship credit
No 84 (!) in a 2008 poll of the PopDose 'favorite singles of the last 50 years': read the list here
A sixty-minute AWSoP radio broadcast on London's Resonance FM, 26 April 2009
Versions of the record recreated in stereo
' ... one of the most overrated songs the world has ever heard ...'
Procol Harum's Japanese single of AWSoP, recorded at Abbey Road in 2012 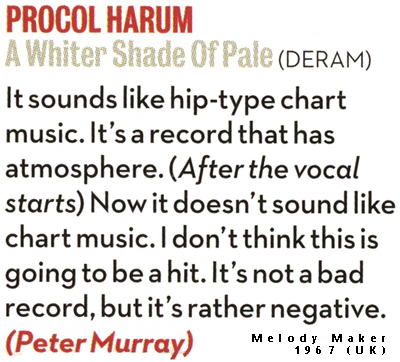 Are Procol Harum one-hit wonders?
Brooker and Reid comment on the song in a 2014 mini-documentary
The 'Record Store Day' fiftieth anniversary album of tracks recorded in 1967, including something previous unheard.

AWSoP at 50
Greatest psychedelic singles' in Record Collector, July 2004
Top 500 singles in Rolling Stone: a poor piece of writing
Henry Scott-Irvine's documentary on the song; plea for fans to contribute to it
Channel 5 Poll programme from 2005, commemorating the 1,000th No 1 hit single
2006: favourite song of The Taoiseach

Other Versions
Try it in a karaoke version with a bouncing ball, wrong words and wrong chords
Richard Nixon, once a president of America, busks the song here
Cacophonously broadcast (!) from a London public house with the composer at the piano
A Whiter Shade of Pale in the movies (especially in The Commitments)
Italian words, bearing scant relation to the original
Tum ho mere dil ki dhadkan, the Asian AWSoP from the film Manzil
Cover versions by a great variety of artists
Parodies: supposedly the sincerest form of flattery ...
Sixty special virgins: the Pat Kelly word-variants
AWSoP covered by a top Danish artist
Jonas Söderström alerts us to a version very few have heard before ... follow this link ... More about the artist can be found at these links. 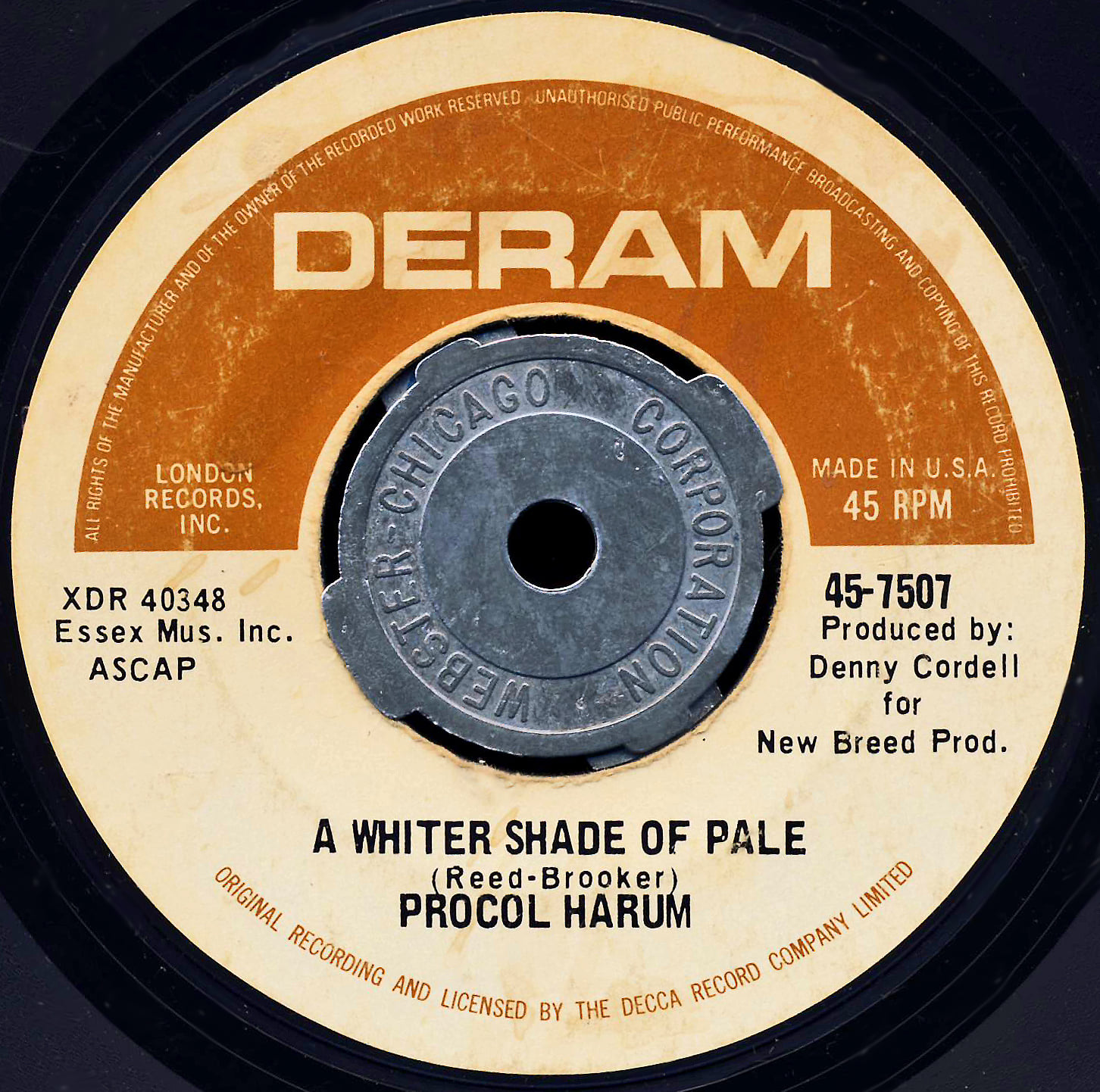